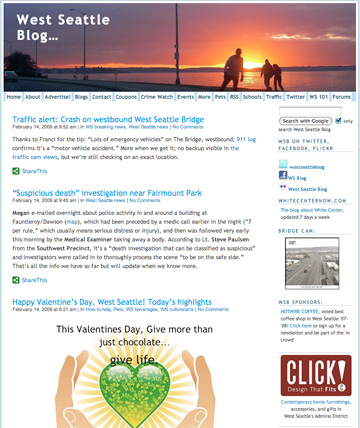 The last few years have been especially tough for newspapers in America.  Many papers which have been in business for more than a hundred years have been forced to close their doors for good; this includes one of my hometown daily newspapers, the Seattle Post-Intelligencer.  Many of these papers were simply not able to transition in a profitable way from print to online.  However, the news is not all grim.  The lines between bloggers and journalists are blurring and experiments are underway with online-from-the-start news venues – e.g. the Huffington Post – which are showing promise.  One example here in Seattle, is a neighborhood news blog, run by Tracy Record and her husband Patrick, called the West Seattle Blog. 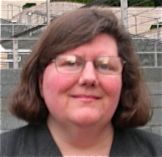 Tracy Record has worked to hunt, gather, process, analyze, and share information in a multitude of media pretty much around the clock since age 17.  Most recently, she was assistant news director at KCPQ-TV in Seattle, a position she resigned in December 2007 to work full time on the West Seattle Blog.  Prior to that, Tracy spent 2 years with the Walt Disney Internet Group in roles including executive producer of ABCNEWS.com. That followed 8 years at KOMO-TV, Seattle’s ABC network affiliate, where she was its first-ever executive producer of new media.  Before that she had worked at a variety of TV stations, newspapers, and radio stations in California, Nevada, and Colorado, collecting 3 Emmy Awards along the way.  I recently had the opportunity to discuss the West Seattle Blog and the reasons for its success with Tracy.

FPP –  When did you start publishing the West Seattle Blog and what > motivated you to start it in the first place?

TR– December 2005. My husband (WSB co-publisher/business development director Patrick Sand) and I had lived here for almost 15 years by then, and I had some observations I wanted to share with somebody. I was really surprised to discover that while many people were writing blog-format websites IN West Seattle, nobody was writing in that format ABOUT West Seattle. I discovered the domain westseattleblog.com was available, and off I went.

FPP– How big is your audience now, and were you surprised by the growth of the blog?

TR– Through the first three months of 2009, we averaged 650,000 pageviews a month (per Google Analytics). You can slice and dice the guesstimate of the actual person count a million ways, but we currently boil it down to more than 7,000 homes/businesses a day. The growth of the site – we don’t call it “a blog” though that’s still in our name since that’s how people know us — is more heartening and humbling, than surprising … we moved to news/information/discussion because there was clearly a need for it.

FPP –  How would you characterize your readers?

TR– Majority over 30. And many more over 50 than the cliche’ view of online users would suggest. But more important than age or other demographic definition, a WSB-er is anyone who wants to know what’s happening right now in West Seattle – as well as what’s coming up later today, next week, next month – and who wants a chance to talk about it!

FPP – What sorts of things do you do to build your readership and what have you found to work best?

TR– Far and away, the most important thing we do is to just keep finding and reporting THE NEWS, with text, links, photos, videos, any means possible, relevant, and appropriate. And that involves listening to the community – through what they send us, what they tell us, what we see and hear. Some would-be site operators make the mistake of thinking that as long as they beat a promotional drum loudly enough, they will get and retain an audience. We are from the “if you build it, they will come” school. We do some marketing, though — in the physical space, we sponsor community events and we “table” at events/festivals, as well as doing a little bit of outdoor advertising; in the online space, we do AdWords, of course, and are embarking on some other strategic online advertising. Participating in social media has become increasingly important; we have a strong presence on Facebook and Twitter, with four-digit “followings” in both places, and we share content, observations, breaking news through both channels, while also receiving information there, and participating in discussions. One important but little-discussed aspect of being present for your community is to be hyper-accessible – e-mail, phone, in person, postal mail, whatever and whenever.

FPP – What sorts of coverage do you provide and how has it evolved over time?

TR– Breaking news (crime, crashes, fires, “why is there a helicopter over my neighborhood”) is huge – and we cover it 24/7. Another major area of coverage involves neighborhood issues – West Seattle has a lot of neighborhood associations and councils and we staff as many of their meetings as we can, as well as trying to stay in touch with their leaders in between meetings. Then there’s development, businesses, schools, politics. Really, there’s almost no topic we haven’t covered. The evolutionary trajectory is pretty simple – we did mostly opinion/observation for the first year, till a huge windstorm threw much of West Seattle into the dark in December 2006, and people started asking us for information that required original reporting — the storm had affected other areas of the region, too, so neighborhood-specific reporting was difficult to find, and no one was doing it on a timely basis here, so we jumped in, and from there, we continued to encounter many more stories that needed to be told, because no one else was covering them – or, they weren’t being covered in a timely manner.

TR– What IS a traditional newspaper, really? Some have changed a lot, some have not. But I guess I’d point to three areas: 1. Timeliness – we run the site more like a broadcast property, which is natural because both of us worked primarily in broadcast (TV and radio). If it’s happening now, we’ll tell you about it now, even if our first report is a quick “we’re checking on the big fire call on Harbor Avenue,” with more and more added to it as we learn more, like the classic AP bulletin that started with one line and continued to grow. Secondly, the collaboration with our community is a HUGE difference: People send story tips, photos, videos, questions, suggestions, crime reports, so much more – and they participate in comment threads and forum discussions. We “mediate” the information-sharing, as professional journalists, but in the end, the site can be what one WSBer called “a block watch on steroids” – a place that you can use to share information with tens of thousands of neighbors. 2. Truly neighborhood-level news: Some of our reports involve matters that even a community newspaper would tend to consider “too small to pay attention to”
– and yet, for community members, these matters are huge. Think – a really bad pothole. Or a road sign that’s out of place. Or a lost pet (we have an entire lost/found pets page). 3. The aforementioned community participation. Newspapers have tended to function as “one-way media” with the exception of letters to the editor. In our format, the community involvement and comment is much more intertwined.

FPP– The West Seattle Blog currently accepts advertising. Have advertisers been enthusiastic and have you been able to support the operation of the blog with advertising?

TR– We are the first financially self-sustaining, online-only neighborhood-news operation in Seattle. Though we don’t discuss specific numbers, the revenue that we currently get from sponsorships constitutes the sole source of support for our household of three (no other jobs, no savings supplementation, THIS IS IT), while also covering all our business expenses, including paying freelance writers, photographers, and technical help. Regarding advertiser enthusiasm – sponsors tell us they get results, and that’s what matters. Since we have the largest “readership” of any news/information source specific to this area, online or offline, it’s the best place to be seen, and to have community members learn about your business.

FPP– You currently have a number of guest bloggers who contribute to the West Seattle Blog. How did you recruit / attract them, and how does the arrangement work?

TR– We don’t have “guest bloggers.” We do pay professional freelance writers for assigned, bylined articles. If you mean our “Blogs” section, that’s a compendium of RSS feeds from people who write blog-format websites based in West Seattle, and the links all go directly to their sites.

FPP– What advice would you give others thinking about starting a neighborhood news blog?

TR– Depends on whether they want to pursue a ‘blog’ or a ‘news operation.’ We are very serious — and taken seriously — about running this as the latter, which involves a major amount of serious news gathering, processing, reporting, and editing. But if you want to run a “news blog,” think about what you think your neighborhood needs, and how you expect to see that information turn up on the website you start. By no means should you start a site and say Hi! We started a site! Now we need people to write stuff for it! If you are not ready to write a LOT for your site as the primary founding contributor – maybe a little less with time as you find regular contributors, if you want to operate it that way – just don’t waste people’s time. Anyone can start a website; only those serious about operating it and providing content for it TFN should do so. And don’t announce a grandiose mission for what you’re going to do before you start doing it – JUST DO IT. We ran our site for two years before running advertising of any kind. These days, the pump is primed for online neighborhood news and if you do a really excellent job, you could probably have enough of an audience to start selling ads after three to six months, but don’t just hang up your shingle and say hi, I’m going to do news for you, buy some ads from me first, K? The worst side effect of trying to run things that way is that your would-be advertisers waste their hard-earned dollars without reaching much of an audience, and no matter how little you charge, that’s not doing you or them any favors.

FPP– What’s next for the West Seattle Blog?

TR– Working on site improvement and new features right now. Long overdue for a design upgrade since we’re still running on a 2-column WordPress theme that was almost the default when we started the site, but we want to be sure, when we launch a redesign, that it doesn’t “fix what wasn’t broken.”  Also, I’ve had an editor/writer job posted for a long time and hope to finally make that hire soon – it’s a really tough decision when you are bringing somebody officially into what’s been a family business – we’ve talked to some great people, though.